From Venice to Navona Square

Written by alessandro on January 29, 2018. Posted in All Stories, Itinerary. 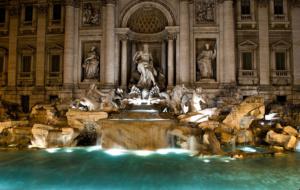 From the Imperial Forums, passing through the Venice Square (Piazza Venezia), you will arrive at the heart of Rome’s shopping area: Via del Corso, Via Frattina, Via Condotti, are the streets you should be looking for if you are a fashion lover. But there is more to see than admiring the clothes: a few meters from here you can find one of the legendary attractions of Rome, the famous Fontana di Trevi (Fountain of Trevi).

In the waters of Fontana di Trevi you can see the statue of Anita Ekberg in an evening dress as she played in the famous movie: “La Dolce Vita”. Besieged by souvenir shops, where you can go shopping and surrounded by palaces, it will surprise you with its beauty.

The Fontana di Trevi was inaugurated in 19 b.C. by Agrippa and it’s a unique piece of the ancient Roman aqueducts, running without pause from the time of Augustus up to the present day. 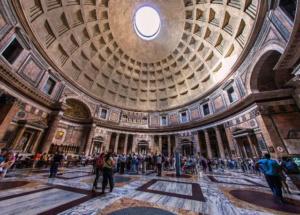 A few meters away from the Via del Corso, you can see the Pantheon, built in 27 b. C. and completely reconstructed by Adriano in 118-125. Many definitions are trying to label and grasp the meaning of this beautiful monument described as the most famous exhibit of the past which was perfectly preserved (worldwide). When the Roman Empire fell, the Pantheon was abandoned until Foca, the emperor of Byzantium entrusted it in 608 to Boniface the 4th, who consecrated it to the Virgin Mary and all the martyrs. Afterwards, when the unity was proclaimed, it had the function of a shrine of the kings of Italy.

For your entertainment and relaxation, we recommend the near by and bustling Navona Square. In the past, one of the most fun-filled performances that were held in this Square was the so-called “lago” (Lake). It was the single point of discharge of the waters of the Fontana dei Fiumi and was closed causing flooding of the square and the coaches that went from there, were assuming special relationships with the water, and were admired by the people who used the lake to cool themselves a bit. Currently the square is frequented by intellectuals and artists during the day and by night, is the favorite destination for young people and entertainers.